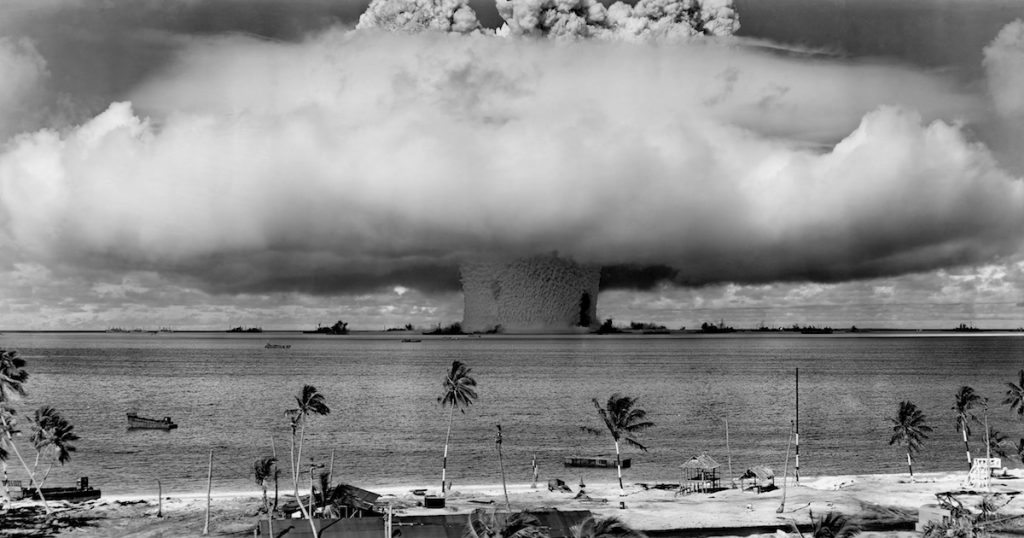 As told by Anna Kelley

On the morning of March 1, 1954, I woke up to a red sky. I did not know why it was red; I was only seven years old. I was on Utirik, one of the Marshall Islands in the Ratak, or “sunrise,” chain of islands, but that is just a word to use. That does not mean the skies always look like sunrise. But this sky did. All around me, everyone was just looking up, wondering too. I was asking them what was going on. Nobody knew.

That afternoon a seaplane came from the US military base in Kwajalein, on the “sunset,” or Ralik, side of the Islands, to where we were on Utirik. It was carrying soldiers, and the soldiers were there to examine us. I later learned that they were checking to see if we were affected by radiation.  Later on, there were some people whose skin was burning, so something very bad must have happened when the sky turned red. My father was one of those who were examined. (They check me every year; they say I’m ok.)

After two days, I remember that a big ship came. It was so big that it could not come to the lagoon side of Utirik; it had to come to the ocean side. I remember how excited my brother and his friends were! I think they are the ones who told me about the ship first. “There’s a big ship at the ocean!” they said. They ran to where all the people were gathered to see it and said, “The Russians are here!” But the men who came off that ship started talking to some of the adults, and I could hear that they were speaking in English, so I knew it was the US soldiers from Kwajalein. They told the adults who knew English that we were all to leave the island. They said it was not safe on Utirik because of the bomb.

The bomb from Bikini Island—the biggest one ever—is what lit the sky that morning when I was just waking up. It left radiation that made so many people sick. Why would they do that? Did they not think that there were people living there? Asleep in their beds? Eating breakfast? Did they not think of those people? My father, my brother, my sister, my classmate, and someday my student; The rocks, the birds, the water, the air. Did they not think of all that was underneath?

They were there to take us away, to Kwajalein. They had to examine us. We had to leave everything. We could take a change of clothes for only one day. We were confused, and I saw that some of the children were crying. I could tell that some of the adults did not like what the soldiers were doing. But we got our clothes and got onto the ship. The ship was so big that it had ladders, like you see in the movies, and the soldiers had to take us one by one up the ladders. They took every one of us, maybe 150 from Utirik, on that ship and up those ladders, and away from home without telling us why.

We were quarantined in the soldiers’ camp when we got to Kwajalein, and stayed there for about a month. It was so small there; every family had just one room. I did not have much to do there. My home island is Majuro (we Marshallese go by our mothers’ islands) and my father was a pastor so we traveled from island to island when I was little. They are all pretty much the same, but it was still interesting to meet and play with different people at each one. I lived most of my life on Kwajalein, but when I lived here I would play Marshallese games like hide ‘n’ seek, or we’d make a ball out of a coconut. In the soldiers’ camp, we tried to play games, but it was not like our home. There were other children there from another poisoned island, but we couldn’t play with them because the soldiers put us on two different sides of a road. When people wanted to visit us at the camp they couldn’t come speak to us or bring us food or clothes or anything we needed. We were left alone and kept away from everything we had.

The soldiers were not mean. Every morning they brought us breakfast, and after breakfast they took us to the lagoon side of the island so that they could wash the poison from us with shampoo. I remember that we had to wear men’s underwear over our bodies to get washed! When I think of this now; I would not have worn them. I would have said “no!” They’d wash our clothes and put them all together in a pile. Then we would have to look through the pile to find our own clothes, every day. Like I said, these soldiers were not mean to us. But they were soldiers, and they didn’t even know what clothes were ours, and this was not our home.

When I think of our clothes in a pile, the ladders on the ship, the soldiers, and the red morning sky, sometimes I get mad. I also remember Lekej, a student of mine when I taught social studies and the Bible on the Islands. He went to the US a lot to be examined because he was really poisonous, and he died too. When my brother died at 69, he had lots of pain, like Lekej’s pain. My sister gets so hot that sometimes she cannot sleep for days and days because she had her thyroid removed from cancer. I remember these people, and the others who died, and those of us who were underneath the red skies, and taken onto the ship, and put in the soldiers’ camp. I get mad because my people are a peaceful people. But I know that you cannot fight to make peace. It does not work.