The Facing Project is a national nonprofit that creates a more understanding and empathetic world through stories that inspire action. We bring people and communities together through acts of empathy that include listening, storytelling, and connecting across differences with the belief that stories are the most powerful tool for change.

Our work embodies the spirit of the humanities by using stories to ask tough questions, find patterns, and challenge long-held belief systems/stereotypes. This is done through three main initiatives:

1) Community-Based Facing Projects: We work with community leaders, educators, government officials, and artists to develop a steering committee to determine the topic/issue their community would like to “face.” Once determined, the steering committee is trained on The Facing Project model, and local writers and storytellers are recruited and paired one-on-one for listening sessions to collaborate on first-person narratives told from the perspective of the storytellers. These stories are published in a book through The Facing Project Press, distributed throughout the community as a resource, brought to life on stage through theatre, and then used in listening circles at various locations (libraries, schools, colleges/universities, etc.) to provide a facilitated opportunity for members of the broader community to have safe spaces to explore the issue/topic, ask tough questions, and dig deeper into the human condition that connects us all.

3) The Facing Project Radio Show on NPR: Launched in 2018, The Facing Project Radio Show has brought stories from previous Facing Projects to listeners around the globe. Each episode is themed to highlight a common issue explored in two to three featured stories, and the co-hosts and co-founders of The Facing Project, J.R. Jamison and Kelsey Timmerman, sit down with national experts to explore these themes. Past guests have included former White House speech writer and national correspondent for The Atlantic James Fallows, former Dayton Mayor and Ohio Governor hopeful Nan Whaley, and NFL football safety for the Cincinnati Bengals Jessie Bates III, among others.

Since the founding of The Facing Project in 2012, community-based Facing Projects have been organized in nearly 100 communities and 18 U.S. states. Because of the diversity of topics and communities involved, The Facing Project has been able to collaborate with a wide-array of individuals and perspectives including black/brown communities, all socio-economic statuses, age ranges (from teens to those in their 80s), and gender identities (including both binary and non-binary).

We hope you’ll join us! 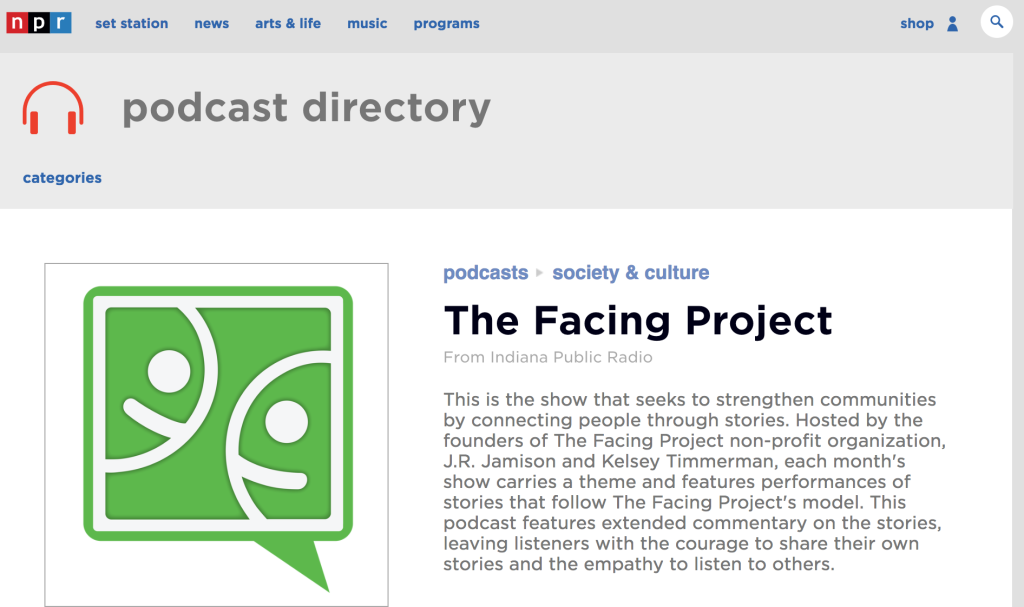