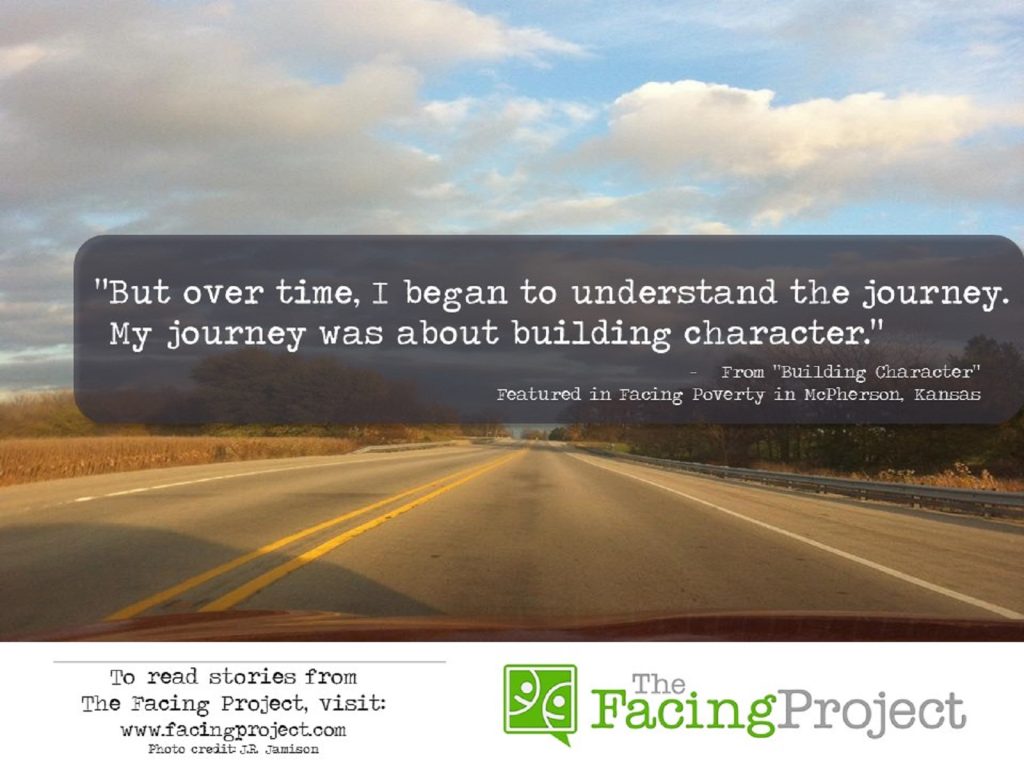 This week’s featured story comes from McPherson, Kansas, where Circles of McPherson County used The Facing Project model to tell the stories of those in their program who have overcome poverty.

Once broken by lingering abuse bandaged only with drugs and alcohol, one woman in their program mustered up the courage to face her past; finding solace in the person who had started her cycle of abuse years before—her mother.

This is her story.

A Circle Leader’s Story as told to writer Anne Kirchner

From Facing Poverty in McPherson, Kansas

If God was truly the loving, caring omnipotent one, why would he allow his child to be violated over and over again in such a horrific way? No parent would ever allow something evil to happen to their child. Your parent should be there for you. If God “The Father” really cared about me, my story would never exist.

I was raised by my alcoholic mother in a drug infested Florida neighborhood. It was the perfect setting to support her meth addiction. When we moved there from McPherson, Kansas, I was told we were pursuing a brand new start. Mom had been raised by her alcoholic mother, and her brother had died from alcohol abuse. We were all victims of bad choices that led to generational poverty. My mom said I could move back to Kansas after one year if I didn’t like living in Florida. She lied to me.

We lived with her abusive boyfriend. Alcohol and drugs helped my mom cope with the beatings. I moved in with a friend so I wouldn’t have to witness the domestic violence. It was there where I met my boyfriend who lived in the same apartment complex.

And it wasn’t long before I began dealing with my own problems.

At age 14 I was hit by a car. The damage to my back was permanent and would limit my ability to work for the rest of my life. When I was 15, I gave birth to my first child. He died. My son’s death spun me into a world of devastation and, by age 16, I was an alcoholic. Another son was born, followed by a daughter.

We lived in a small apartment, and I was instructed by my boyfriend to stay home. I wasn’t allowed to leave the apartment. I wasn’t allowed to have friends over. Just like mom, alcohol and drugs became my coping mechanisms. By age 22, I had had my fifth child. I found myself trapped in a world of poverty due to life circumstances and how I chose to respond.

Everyone tells me I have a powerful story. What’s so powerful about it? For me, it’s just a story. I became a mom at age 15. Still a child myself, I had to grow up immediately and rely on motherly instincts in order to survive. I thought those instincts would be easier to grasp with the help of alcohol, meth and nicotine. I had no idea where those choices would take me.

The years were not good. I continued to depend on alcohol and drugs. Three of my four children were taken away from me. Depression and suicidal thoughts controlled every waking moment. I could only work lower paying jobs due to my back problems and lack of education. My youngest child was in and out of mental hospitals because she was cutting herself. I was in an abusive relationship. At some point during this nightmare I ended up back in McPherson. My life had become a heavy burden. Why was I being punished? The answer never came.

But, then one day, I met Rebecca Lewis who, for two long years, tried to convince me I needed to help myself. I needed to get sober. I needed to end my abusive relationship. I needed to get rid of my many friends who were alcoholics and drug addicts. It was time for me to make good choices and rise above and beyond a life of poverty. Rebecca encouraged me to find relationships elsewhere – relationships that would replace the drugs and alcohol that I used so often to manage my meaningless existence.

I moved back home with my mother, who had also moved back to McPherson and had been drug and alcohol free for 20 years. Strange to think the woman who had led me through one bad experience to the next was now my safe haven. Living at home was crucial to my emotional well-being as I fought off powerful cravings related to the only life I had ever known. But over time, I began to understand the journey. My journey was about building character.

All the trauma I’ve experienced is more than one person should ever have to handle.

Somehow I was able to share my story. And through the Circles process I learned I must be honest about my past. Henry David Thoreau once wrote, “Be true to your work, your word and your friends.” I live by that. I exposed my weaknesses and scars, and now my addictions can’t control me anymore. I have focus and direction. I’m learning the value of escaping generational poverty. I have a full-time job. I purchased a car. This year I moved into my own house. Soon I will consolidate my student loans, striving to be debt free. I will file my own taxes. And then I will take a vacation with my 16-year-old daughter. Circles brought me from being a “nobody” to being a “somebody.”

When I think about what I’ve gone through, I know I have a level of wisdom that is beneficial. I want to help those who are ready to help themselves. It doesn’t matter how hard your life was or is, tomorrow will always bring a new start.

The Facing Project connects people through stories to strengthen communities. This movement to share stories and raise awareness is in cities across the United States facing issues such as poverty, homelessness, sex trafficking, and more. Facing Project stories are compiled into books and on the web for a community resource, used to inspire art, photography, monologues and most importantly—community-wide awareness and dialogue. For more information about The Facing Project, visit the main site.