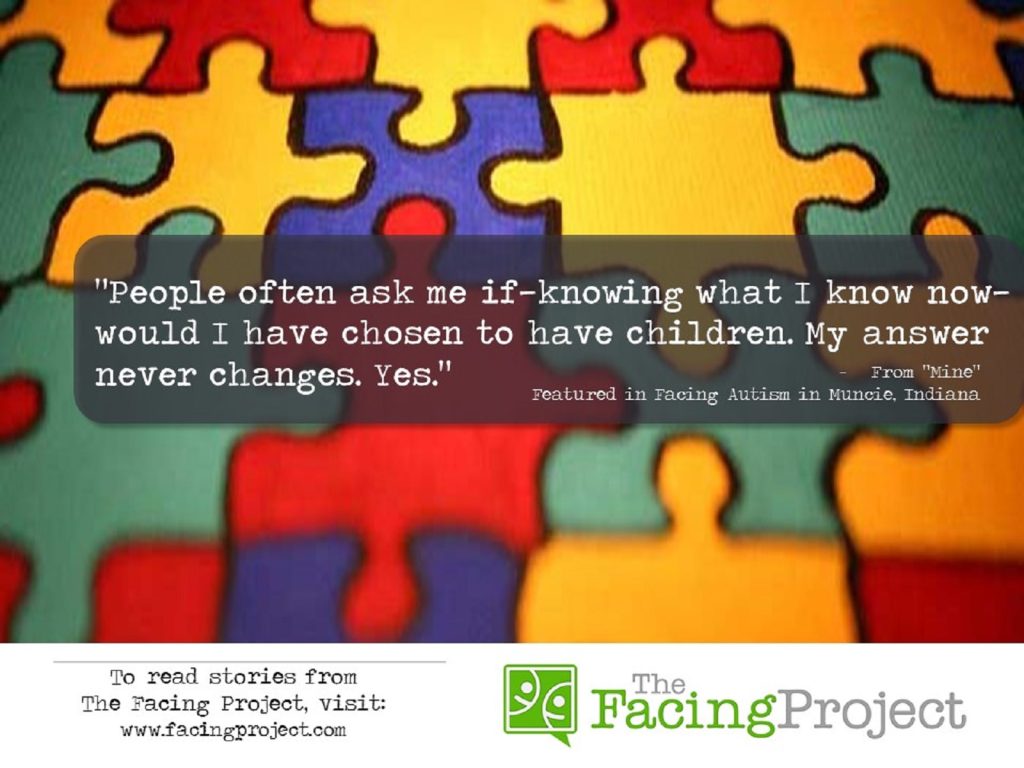 This week’s featured story comes from Muncie, Indiana, where Interlock used The Facing Project model to tell the stories of families and therapists involved with the organization who face autism each day.

Challenged by raising three teenagers on the spectrum, one mother shares her experience of seeing past autism to find her children.

This is Christine’s story. She is 43.

As told to writer, Chris Bavender

People often ask me if—knowing what I know now—would I have chosen to have children.

Even though all three of my children have autism.

Even though there are no breaks, you just have to keep going. You learn to live without sleep. My husband’s job takes a lot of time—sometimes 65 hours a week—so, it’s mom all of the time.

Even with all of the challenges.

And, there are plenty.

My oldest, Jacob, was born on Halloween in 1996. The chord was wrapped around his neck and he was slightly jaundiced, but his APGAR scores were good. He developed fairly normally—sat up, rolled over, and was walking by age one. He was speaking a little, but had difficulties with sleep patterns.

It was in March of 1999—shortly before Jacob’s third birthday—that I received the news Jacob had autism. I remember sitting there in disbelief. This is my child—I had all these plans for him and I had to just chuck it all away and start over and not have any expectations.

It’s heartbreaking. It really is. Especially when you are told there is nothing you can do. I was told I needed to enroll him in a developmental preschool and that physical and speech therapy was recommended. I was told to fence the yard so he couldn’t run away—like they were talking about a dog—not my son.

When I was pregnant with my second child, Violet, my husband, Mike, and I asked the doctor if she was going to have autism as well. We were told there was a good chance she wouldn’t since she had a different biological father (I divorced Jacob’s dad in 1998).

It didn’t matter to me anyway because I knew I would not—could not—abort my baby.

At first, I didn’t think she was autistic; she was progressing normally except for her speech. I mentioned something to her doctor who said I was imagining it and Violet was probably just mimicking her brother.

Fourteen months later Eleana was born. Like the other two, she progressed normally physically. I never really suspected autism with her except for her extreme defiance, lack of speech, and that none of the children seemed interested in playing with each other.

Violet and Eleana both were diagnosed at the same time in May 2006. This time, however, I was a little more prepared for the diagnosis.

But it doesn’t mean it’s not a daily struggle.

All three children are in public school in Muncie. Eleana is in a mild class, Violet is completely mainstreamed, and Jacob is in a severely disabled class.

Jacob is pretty non-verbal all the time. He gets into a rage at the drop of a hat for no reason; lots of times without warning. He bit me once, just barely breaking the skin, but bruising my arm. I ended up in the hospital with streptococcus toxic shock syndrome. They had to cut out several parts of my arm and all my organs were shutting down—I almost died from my wound.

I don’t know what to do with him sometimes. We know he will have to eventually go to a group home for the rest of his life—especially if something were to happen to us. But, as long as we can handle him, we are going to keep him at home. I am not going to throw him away or lock him up.

There are days I mourn the child who could have been. But we have to get over it because he is here and this is taking place—this is our life.

Occasionally, I go into the bathroom and lock the door and cry—some days more than others. But I have to be strong for everyone else.

Violet also has an anxiety disorder and is very sensitive. When her brother gets upset she does, too. She can be really cute—like the time I asked why she waited so long to talk. She told me it was because she had too many questions to ask and didn’t know which to ask first.

Eleana is extremely stubborn—especially when she wants something and isn’t given it. She literally stands in front of you screaming and doesn’t move until she gets what she wants. She will destroy anything at will, especially a freshly cleaned space.

You have to keep Eleana next to you, or at least know where she is and what she is doing, at all times or she will take off—or things will be moved, colored on, cut, ripped. She demands all attention.

Schedules are always a challenge; each child has their own time frame and ways of completing tasks. Jacob, you have to physically prompt or take his hand to make him complete a task. Violet and Eleana are a little easier to motivate with a reward.

Discipline is no easy task either, sending them to their room to calm down, or siting them on a chair doesn’t always work. We have to be a bit more creative. Taking their favorite thing away for a while and having to listen to all the complaining and whining is trying.

Having “normal” friends hasn’t been very easy. Violet is always trying to make friends, but their parents don’t want them to spend time with her outside of school. That makes me sad because she thinks no one loves her.

But I do. I love all my children.

People often ask me what I think led to my children being autistic. Was it the vaccinations? The environment?

I think that all plays into it, but no one can prove anything.

You just have to deal with what you see.

And what I see are my children.

Facing Autism in Muncie, Indiana, is an affiliate of The Facing Project. To learn more about Facing Autism and read other stories from the project, visit their site. If you were moved by Christine’s story, you can contact her at christine_weida@yahoo.com.

The Facing Project connects people through stories to strengthen communities. This movement to share stories and raise awareness is in cities across the United States facing issues such as poverty, homelessness, sex trafficking, and more. Facing Project stories are compiled into books and on the web for a community resource, used to inspire art, photography, monologues and most importantly—community-wide awareness and dialogue. For more information about The Facing Project, visit the main site.