The Magic of the Facing Project 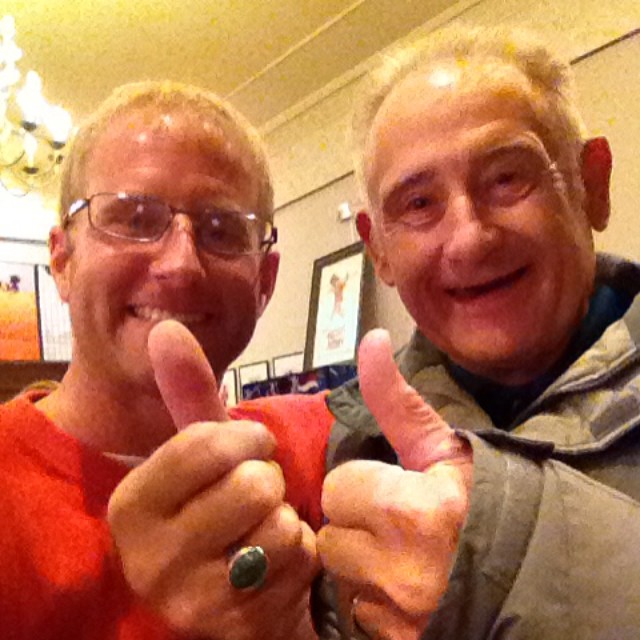 Jerrold and I at the Facing Disabilities event.

That’s how I started Jerrold’s story. As soon as the Ball State Theatre education student read the sentence, the audience laughed. I heard the laughter and so did Jerrold.

Jerrold was sitting behind me and to the right at Hillcroft’s Facing Disabilities Project, our third Facing Project in our hometown of Muncie.

When I first met Jerrold, I thought there was no way I was going to find his voice. His three most common answers to my questions were: yes, no, and I don’t remember. I’ve had more in-depth conversations with Spanish-speaking coffee farmers in Colombia, and I barely speak Spanish. I talked to him for an hour on the sunny back porch of his group home. Then he grew tired and our conversation was over and my notebook was too blank.

There I was, the co-founder of the Facing Project, an author of two books, and I didn’t have a story. I was a little panicked. Originally Jerrold’s story, one in which he had been in programs with Hillcroft Services for decades, was going to be the thread that held all of the stories together. And I had nothing. I still barely new Jerrold, let alone was I able to write as if I were him, using his voice. What was I going to do?

I wallowed a bit and then I put on my big boy writer pants and got to work.

I visited Jerrold at work and watched him interact with co-workers. I chatted with him while he stuffed envelopes. I talked with his supervisor and his co-workers.

I went on a date with Jerrold and his girlfriend to KFC. I watched Jerrold be shy, be funny, be ornery.

I watched and I listened and, even though Jerrold doesn’t have an abundance of words, I heard Jerrold’s voice. His was a voice full of life, laughter, and wisdom. His was a voice that had lived book’s worth of stories.

And so as the reader at the event came to the end of his story, I watched Jerrold some more, and I listened to his story once again. I’m not sure what it was that I felt in my chest. I guess I felt like the Grinch when he heard the music down in Whoville and his heart grew three sizes. It was physical. I had walked and written in Jerrold’s shoes, and I think I felt what he felt or at least I imagined what he felt.

Maybe this quote from J.K. Rowling can better capture what I experienced:

“The power of human empathy, leading to collective action, saves lives, and frees prisoners. Ordinary people, whose personal well-being and security are assured, join together in huge numbers to save people they do not know, and will never meet…unlike any other creature on this planet, humans can learn and understand, without having experienced. They can think themselves into other people’s places. We do not need magic to change the world, we carry all the power we need inside ourselves already: we have the power to imagine better.”

It was magical and the magic started with stopping to listen, watch, and get to know a fellow human being whom I never would have met, if not for the Facing Project.

The night of Hillcroft’s Facing Disabilities Project, 20 other writers got to experience the exact same thing.

I’ve written thousands of stories, columns, posts, and articles, and two books. But the most magical stories I’ve had the privilege to write have been Facing Project stories.

If you’d like to start a Facing Project in your community, please email me at kelsey@kelseytimmerman.com and/or go here.