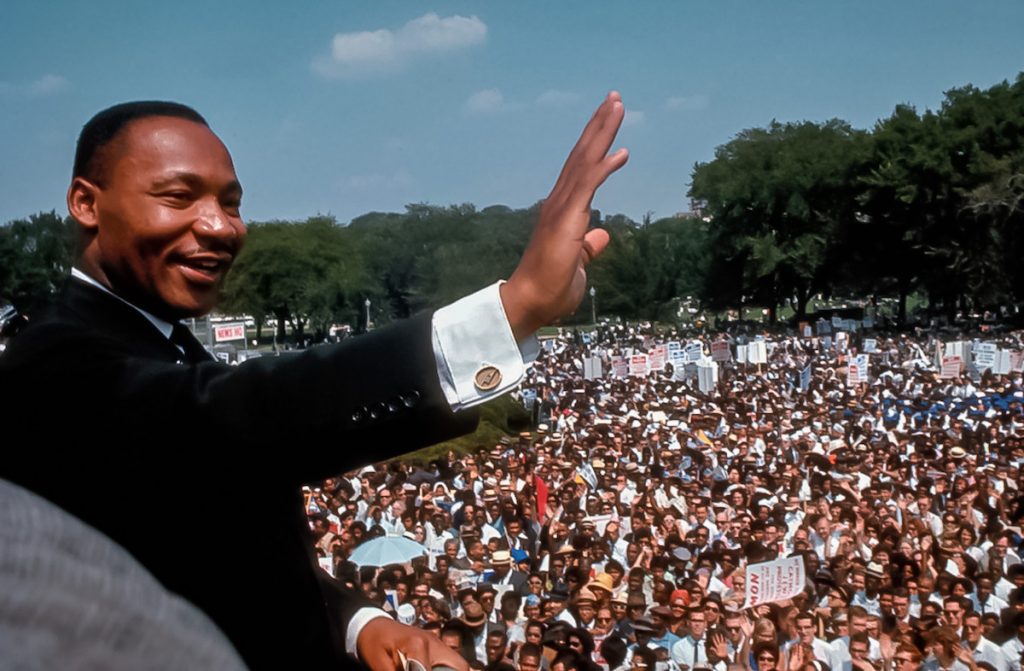 Heavy fog was just lifting when we started to make out the silhouettes of officers with rifles looking down on us from every overpass. It was an early, cold February morning in 1987. We were four tired college students – definitely not used to that early hour – making a sleep-deprived drive north from Atlanta to Forsythe County, Georgia. Despite everything we’d watched about what was happening there on the news, the nation’s eyes glued to a nowhere town, we were not prepared for what we were about to see that morning.

It was just sunrise when we exited the highway and followed the traffic, slowly crawling towards a large gravel parking area, as directed by the army of law enforcement present. With all of the activity and anticipation, it was almost like arriving at an amusement park. We stretched out of the car and felt the chill. We chattered excitedly about all of the people who were there to support the same cause; we were there to show our support for the events that had occurred at the first MLK, Jr Day march, which had taken place a few weeks earlier, and which was then counter-protested by local members of the KKK and citizen militia groups. This was the third weekend of back and forth protest and counter-protests, and we were excited by the turnout. As we reached into our trunk to grab our coats for the march, the passengers in the car next to us also reached into their trunk to pull out their gear for the march – white robes!

We suddenly hushed our voices. Quick nods at each other and anxious glances at them. I watched with disbelief as more and more white robes appeared, fluttering in the cold dawn light.

Close to a thousand people had appeared that morning – as we approached the staging area, the armed officers started to sort the protestors, often using our apparel to funnel us into different chutes, like cattle. The police, the Georgie Bureau of Investigation, the Georgia State Patrol and other lawmen had come in force, and they stood shoulder to shoulder along the march route. MLK supporters to the left, and counter-protestors (white robes joined by camouflage jackets and pants) to the right. On the left, we started the march toward the town center; we joined in the chorus of traditional civil rights march songs, feeling the excitement of solidarity. On the right, the counter-protestors were gaining in size and strength, as well.

I can’t say if it was intentional, or if someone had made a split-second decision, someone who didn’t know the road, didn’t think of the consequences. But about half a mile down the road, an embankment rose to the right of the road, and the haters had the higher ground. Now, I’ve never been in war, but I know that the high ground is the stronger position. I looked up and all I could see were white robes, camo, and confederate flags. We felt increasingly vulnerable as the crowd grew on the hill, and we became the targets of their hate-filled shouts and racial epithets (regardless of our skin color).

We kept our heads high and raised our voices up toward the embankment with choruses of civil rights songs to the sporadic drumbeats of rocks clattering down around us. When I’d seen the robes, I’d braced for violence. That was part of the story, this idea of people marching for peace and being attacked. Of course, I had this naïve optimism that it was simply a part of our past history, and that it could not still happen today. But there I was, looking up, thinking “Hate still lives here today.” There I was, looking up at not just men, not just men and their wives, but at their children. And the children shouted things no child should ever shout or even know. These young children were not born with this hate.

From where I marched, I didn’t see everything that happened that morning. I didn’t see Jesse Jackson, or Coretta Scott King, or Hosea Williams or many other Civil Rights leaders. I also didn’t see David Duke, once Grand Wizard of the KKK. But they were all there that morning. It was even covered by a new talk show host that we watched when we got home – Oprah Winfrey!

Eventually, the protests died down. MLK Day became a national holiday. But 30 years later, as I travel back to Atlanta and reflect on this landmark event, it seems we may never stop working to root out racism and hatred. For me, it was a single day, but I gained a lasting impression of how, for others, the sense of vulnerability and fear of those on the high ground is daily life.