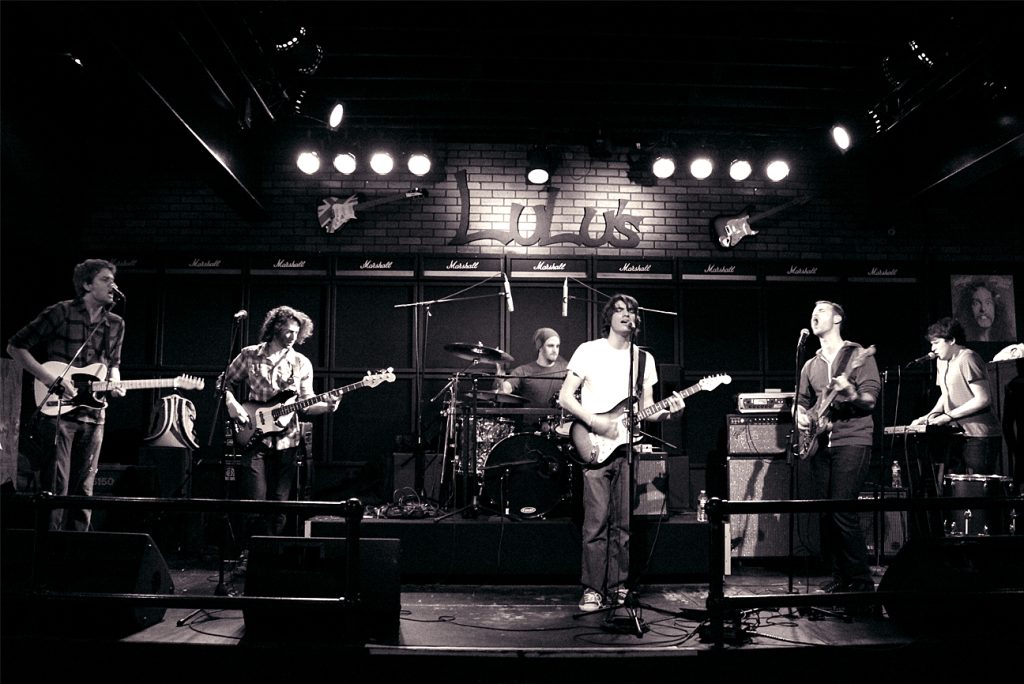 I was pretty into music growing up. After I got to high school, I started playing in rock band, and we won the “Battle of the Bands”. So after that I knew I wanted to be: a rock star. I moved to Greeley with my band in 2006. A couple of us were going to UNC, a couple of us were just working up here. We did the “Greeliest” thing you can do and moved into this big old house on 11th Avenue.

When I moved here, there weren’t any concerts going on. The only nightlife around here were the house parties and stuff. Nightlife is obviously very important for a city to be an actual city, and I thought that it was really important to have live music at least as one facet of the nightlife scene. So I settled in and started playing shows here. What started as booking my own band turned into booking other peoples’ bands, and it was kind of an ongoing thing from that point.

I first started off doing concerts at my church building; they really helped me out . Then the church moved to the Atlas Theater. They bought this old rundown building, and it took about six to twelve months to renovate. We built a stage up high, put in some colorful, moving lights, and bam: it was ready for concerts. That was going well for a while, but then the city caught up to us; we didn’t have a “Certificate of Occupation”. Whoopdy doo. A few months after we got started, they said, “You guys can’t be doing concerts in here if you don’t have proper fire alarms.”

I definitely wasn’t making money back then; it was just a passion. When you charge five dollars at the door and don’t really sell concessions, it’s pretty hard to pay the security, the sound guy, promotions, and the bands; actually, it’s nearly impossible.

So I went over to a friend of mine. They knew the guy that owned Wing Shack, Brian. We went over to Brian and talked to him a bit. That’s how I started doing my concerts at AF Rays, the little bar next door to Wing Shack. That was about the time I was turning 21, and I quickly learned that having a liquor license is a big part of the concert business (before I was at AF Rays, I was just selling soda pop to young kids). Things started to get a little more serious after that. AF Rays lasted about four years, then I graduated in 2012. The economy was pretty slow at that time. I did a few interviews and no one was really hiring, so it just didn’t really work out.

In 2013, I had an opportunity to sign a lease for the Moxi. At that time, it was the recently defunct Union Colony Dinner Theater. UNC had expressed an interest in taking over the building for the arts department, which kind of sucked because it slowed down the process a little bit. But then UNC pulled out, and the Wing Shack guy, Brian, and I were able to convince the landlord to lease it to me! It was definitely intimidating. I had a small child at home and not really any money. It was a risk, but it finally seems to be paying off now.

The Block Party is one of my favorite events. It’s a big back-to-school event every fall. My friends from the Atlas Theater — Erick Long and Erik Riley — and I started that back in 2007. We wanted to put a concert on that really connected the community and the UNC kids. There’s this huge disconnect: UNC students don’t like Greeley. Well, at least they didn’t ten years ago. We thought, “How do we get them excited about the city they live in?” It was a challenge, since at that time, there was a stigma that no shows or anything fun was happening in Greeley. We thought, “We’re going to have a Street Fest and we’re going to have all these cool bands come and play.”

It’s a really fun event and it gets more and more rewarding every year. We had a huge one this year! We had the band 888 out there, and we had The Burroughs and The Unlikely Candidates. Next year will be the tenth year, so that should be exciting.

One time we had Tickle Me Pink show up right before they signed their contract with Wind Up Records, which was kind of a big deal. I remember one of the local reggae bands throwing eggs at Tickle Me Pink while they were playing. It was definitely a DIY, first-set sort of thing. We had a tiny little stage with no lights, and the power was cutting in and out. No one got hurt or anything, but it was a lot of fun.

In the first few years, we really saw exponential growth. It was really cool to watch. Before, it had been a slow growing process, but once I got the Moxi, it was full throttle. We’ve been able to bring some really fantastic acts. We’ve had Pepper here, and we’ve had Boombox, Afroman, and Sno the Product.

This week, we got The Burroughs. They’re a home-grown, Greeley band. I definitely get a lot of enjoyment out of local bands like Silver and Gold and The Burroughs. In The Whale played, too; they’re a band from Denver, but he’s one of the dudes that started the Block Party with me. It’s really cool watching them succeed as a band. They moved to Denver in 2013, and now they’re touring like 200 dates a year. They’re actually making it! That makes me realize that it’s no longer a tiny little scene, here in Greeley.