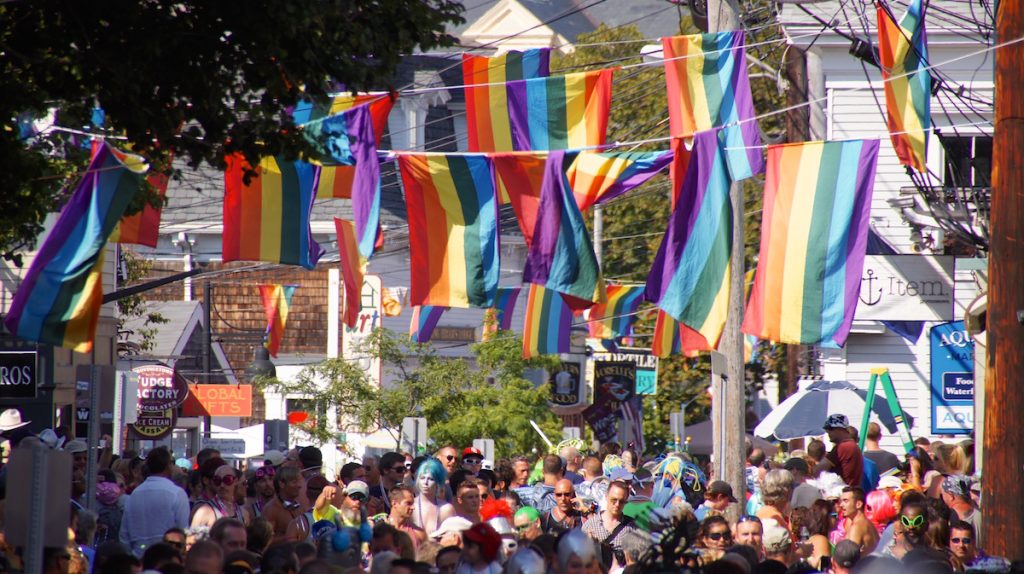 I also wouldn’t be who I am if I had stayed in my hometown. I think geography has a large part to do with who we are and the places I have been in my life have shaped the person I have become. From a small town boy afraid to utter the words “I’m gay” to a grad student who was given a new acceptance and freedom and now to a husband and teacher advocating for the unheard, I have only ended here because of where I started.

I started off in a small town in Ohio where, even after going to college and coming back I was afraid to talk about being gay. I couldn’t even bring myself to go to a gay bar, in fact I sat in the parking lot of one near my hometown and could not work up the courage to walk in. That was because once you do that you’re out – once you open up that door those people know your secret and you never know who you are going to see.

It wasn’t until grad school that I had permission to explore that part of me. There, for the first time, my feelings were legitimized. I could start telling people and acknowledging that part of myself, and if it weren’t for that freedom I would have never met my amazing husband. The gay and lesbian population there was visible and large enough that there was an active group on campus and also pretty active nightlife. There were gay bars and lesbian bars and they were pretty popular. I remember this kind of weight being lifted off my back as soon as I entered a bar there.

In Springfield, there are a couple gay bars that serve as sanctuaries for our community, but when I first visited one of the bars back in 2002, the atmosphere was different than the clubs I came to know in graduate school. The freedom that came with entering a space like that wasn’t exactly the same when you have to knock to be let in.

I remember walking up to the door of a bar here in town and since the door was locked I knocked. I remember hearing people shout out “door” which, I learned later, was to notify the bar owner so she could come check out who it was.

She opened the door and asked something like “do you know what kind of place this is?” And I said, “Yeah I think I do.” Then she asked, “Are you ok with that?” I ended up being let in but I realized then that Springfield was not a place that allowed its LGBTQ community acceptance or security.

This different city made for a different LGBTQ community as well. It was smaller, more tightly knit and supportive of each other. That bar owner did heroic work creating a place where everyone was accepted and where everyone could lift each other up. She was the den mother of the gay community.

“I am back in a place where many people are afraid to utter the words “I’m gay.” What is different now is that I am not one of them.”

Since then many other people have worked tirelessly to protect and fight for this community, but unfortunately we still have a long way to go. I am back in a place where many people are afraid to utter the words “I’m gay.” What is different now is that I am not one of them. I am fortunate to have a job and church and many people in my life that accept me for who I am, when most people in this city do not have all three.

I honestly feel you become illegitimate in Springfield if you utter the words “I’m gay.” One of my friends told me “I could never do what you do, I would get relocated if I was that outspoken.” I know a bunch of others as well that, if they were out to everyone they worked with, could get easily fired or relocated. Through the city’s policy and its treatment of the LGBTQ community Springfield has said that if you are gay or lesbian be on your guard, you are not legitimate here, you are not protected and you are not a child of God. The churches are a huge part of it, and until they stop preaching hate at the pulpits not much will change.

I do have hope, though, however small, that things are getting better. We are heading toward a more progressive future, the world isn’t turning backwards, it is just a matter of what pace and with what grace we get there. We also have to remember we are never done fighting these battles and we just have to hope that, in the broad scheme of things, we are on the winning side.

I think the best thing we can do is be visible. Show everyone that, no matter what they say, we are a legitimate part of this town and we are not going away. I think the banners and billboards are a good way of doing that. I got a message from a person who is transgender and who said she had to pull over the car when she saw one of the billboards. She just cried.

At the very least I grew up in a town where I didn’t see anyone gay, kids in Springfield are now growing up in a town where they see banners. There are also many brave youth stepping forward and leading the way for their peers. These changes may not have shown up at City Hall but they are having an impact on the minds of the youth in our community.

Your community or your geography gives you a palette and says here, these are the colors you can paint with. Of course there are extraordinary people who will figure out a way to paint their own identity regardless of what palette you give them, but for most people it is so difficult to paint with a color you have to try to make up yourself. My hope is that we are giving the children in this community more options and more colors to work with. Then maybe in twenty years Springfield will be a diverse masterpiece that we have helped to create.