Creating Understanding Across Difference Starts with Owning Our Stories 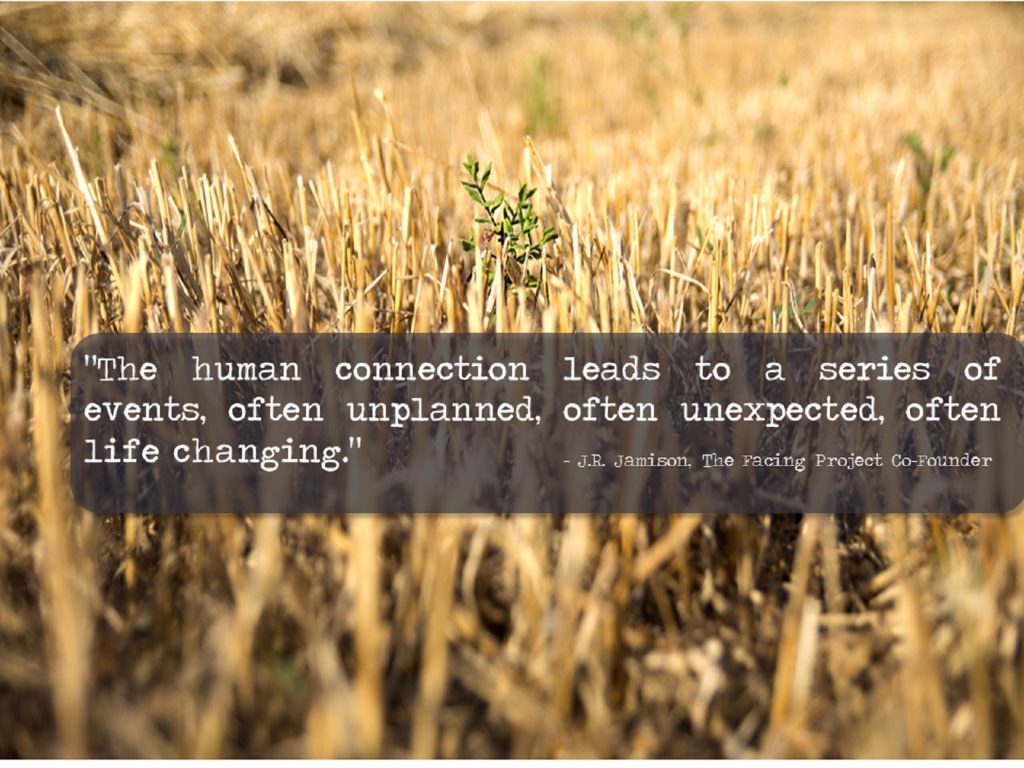 I stared into a sea of nuns in traditional black-and-white habits. Peppered in between were sweatshirts, backpacks—college-aged Catholic women and men. On the tip of my tongue lay three words that were sure to bring lightening down from the heavens and into the university chapel: “Because I’m gay.”

There were tears, but no lightening. No one got up and left.

I shared the remainder of my coming out story, and then transitioned into the rest of our talk; which is more about connecting people through the power of stories than it is my coming out story. But that piece of my overall story continues to connect my narrative to the lived experiences of others.

I had never planned to incorporate my coming out story into our talk that night. This was added earlier that afternoon, as Kelsey and I drove from our hometown to the university. A close friend of mine from college had passed away two months before, and I shared with Kelsey the impact Steve had on my life and how the coming out process for me would not have been so easy without his support.

Eighteen years before, Steve was a part of my orientation group at Ball State University. In the L.A. Pittenger Student Center, we gathered with other orientation groups, hundreds of students, to play a game called Cross the Line. It worked like this: everyone started out on one side of the room and a series of questions and statements were made, and if you agreed you went to the other side of the room and if you disagreed you stayed put. Then a discussion would ensue. The idea is to break comfort zones and begin discussion across difference. The questions started out fairly easy and then got harder:

If you like Coke, go to the other side of the room. If you like Pepsi, stay where you are.

If you have dealt with divorce in your family, go to the other side of the room.

And then this question:

I started toward the “it’s okay” side, and suddenly realized no one else was headed that way. I stopped in the middle of the room, looked back at all of my gay-is-wrong-peers, and stared over at the other side where Steve stood. He whispered, “It’s okay to come this way.”

Even though I desperately wanted to join Steve on the other side, I whispered back, “I can’t.”

I saw the disappointment in his eyes, but I also felt a sense of comfort in his gaze. We were 18, kids really, but that moment sealed our friendship. A friendship that lasted through both of us fully coming out, falling in love and out of love with each other, marrying other people, celebrating new pets and jobs and homes—all spanning the next 18 years until he died.

I was lost in grief when I shared the story with Kelsey, and then he said the unexpected: “That’s going in the talk.”

I wasn’t too sure at first. That’s not why I shared the story with him, for it to land in our talk, but he argued I wasn’t sharing my authentic self if I couldn’t own that story on stage. Our whole purpose behind The Facing Project is to connect people through stories, and I needed to do that with my own. Kelsey left it up to me to decide, but he shared that the story tugged something inside of his heart when he heard it. And it may be the story others would need to hear as well.

Being a speaker, I have the somewhat awkward role of doing meet and greets after my talks. I typically sit at a table for 30 minutes to an hour with a reception line of people who usually thank me, ask for a picture, and have small talk. Don’t get me wrong, I enjoy this because I get an opportunity to meet individuals who are fans of my work and of The Facing Project, but I often get so little time with them that the conversations aren’t long lasting which leads to little depth.

That particular night, however, after I stared out into a sea of nuns and college students and shared my coming out story on stage for the first time, a young woman who waited in line for 20 minutes said, “Hi, I, uh, want to share something, but, uh, I’m really worried you may take it the wrong way.”

This was definitely an “oh shit” moment for me. I was pretty certain this student was on the gay-is-wrong side of the room. But just as I was preparing a response, she said, “I’m gay, too, and I feel alone here at this campus. I only know of one other gay person, and we only have each other, but, yeah, uh, how can we meet other gay people?”

That, I was not expecting. But I quickly realized had I not shared my coming out story that night on stage, I would have never reached her in the same way. We chatted for a few minutes, I shared some sound advice, pointed her in the direction of resources, and reminded her to be strong.

After the event wrapped up, one of the nuns approached me, took both of my hands in hers, looked me in the eyes, and said, “Thank you for being brave and sharing your story. We need stories like yours to help us be a more inclusive institution.”

Since that night, I have shared that same story on stage at least a dozen more times. Each time I feel just as vulnerable as the first, but I make my way through the story and move on to the next part of our talk. Each time, I’m greeted by an individual who shares his or her own story with me.

I’ve had a college dean say the story provided him hope to cope with a recent suicide on campus and find new ways to reach out to students who feel like they are the “other.”

I’ve had a victim of rape say she has felt alone, but she’s inspired to share her own story as a way to create connections and help others feel brave.

And last week, while giving a talk at the Civic Center in Charleston, West Virginia, I had a Vietnam Vet Marine share that he’s recently had a coming out of his own—telling his friends and family what he experienced in Vietnam. Releasing all of the thoughts and emotions he had bottled up for years. While my story and his story are different, he told me he understood what it was like to hide something for so many years and how good it felt to finally let it out.

Though the sister, the vet, or even the college dean and I likely don’t see eye-to-eye on all issues, I’m constantly reminded—by the intersection of their stories with my own—that we are all human.

Despite where any of us stand on an issue, our stories can bridge the gap. They allow us to cross paths in the middle—bound by our differences yet threaded with our similarities—and leave behind pieces of ourselves.

Previous Post
Tour our new HQ on Periscope!
Next Post
10 Ways to Show Your Gratitude, Beyond Giving Thanks