Kiyah is a 12 years old. She lives with her mother and younger sibling (sister). Kiyah says that her home life is “peaceful.” She attends a public middle school in South Bend, Indiana. Kiyah said that her role models include her Mother, her friends, and her family. When asked to describe her strengths, Kiyah could not answer, except to say that she “doesn’t know.”

Kiyah described that her current mission in life is to go to school. She stated that she awakes each day at 5:00 am in order to be ready for school and to arrive at 7:00 am. Kiyah is proud of herself for being “smart and knowing how to get good grades.” She also stated however that sometimes she “does not do the work” required in class.

Kiyah described specific things that she would like to have changed in her life and in her community. The first thing she would change about her life is “the way my dad acts.” She then added that “he never calls me, and I don’t get a gift for my birthday.” Kiyah stated that even though her father does not have an active role in her life, “I love him anyway.” When asked what she would like to see changed in her community, Kiyah thought for a moment and said “stopping racism.” The fact that she feels racism is one thing that she would like to change is telling us that racism is still a problem in our community and readily comes to mind in the thoughts of a
12- year-old girl.

Kiyah stated that she attends the Boys and Girls Club, and that attending has made a positive impact in her life. She also attends Faith Apostolic Church. When asked what influences her life decisions she said her “parents.” She said her mother helps to make her feel “powerful.” 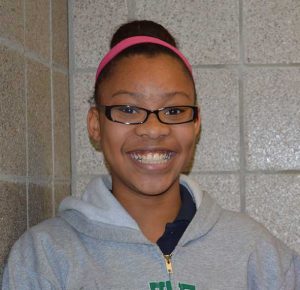 During my interview with Kiyah, she appeared to be very smart and intelligent. I could tell that Kiyah’s mother is an important part of her life based on the way Kiyah talked about her. It is important to Kiyah to help her family and her friends in any way she can. She did say that sometimes, her friends do not want her help. Kiyah also described that she would like to get better at “helping more people.” Kiyah believes that it is “always important to treat people with respect” and in doing so, she expects to be “treated with respect as well.”

Kiyah dreams of becoming a lawyer, and this has been a dream of hers since she was in the 3rd grade. She wants to become a lawyer because working in this capacity is a theme in her family. Kiyah understands that in order to become a lawyer, she has a lot of work ahead of her. She is excited about attending college and would like to begin her education at Ivy Tech Community College.

Kiyah said that there is “nothing she would change about herself” and said “I like who I am.” She seemed to be very smart, responsible, and knows what she wants in her future. I believe Kiyah has what it takes to become successful and to be the person she envisions in adulthood.