Nikki is 15-years-old and attends The Crossing High School at The Kroc Center where she feels she is “making progress.” She feels that she did not “fit in” in regular high school and said that she is “more comfortable” attending an alternative high school. Nikki dreams of attending a prestigious school and studying law one day in her future.

Nikki’s life has not always been easy. Nikki said that if she could have the power to change one thing in this world that it would be “the mindset society holds about homosexuality.” Nikki stated that her biggest life accomplishment thus far has been “losing 130 pounds.” Nikki stated that the most difficult situation she has been through in life is “losing her brother who passed away.” This caused her to experience a great deal of pain and anger, and she said she is finally, just now beginning to be able to make progress. Nikki is aware that this experience has affected her and she feels this experience has caused her to lash out on those around her. She described that she has taken her pain out on adults in her life including her mother and teachers and on other kids at school and in her neighborhood. She regrets how she has behaved in the past and is working towards making changes in her life for the better. 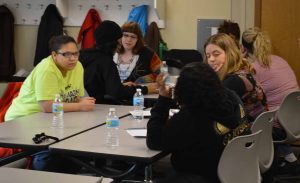 Nikki has experienced many challenges in her short 15 years of life. She feels that many of the challenges she has faced stem from the pain she has endured in losing a brother at a young age and the anger that she has developed. Nikki has spent weeks at the Juvenile Justice Center, nights at Safe Station, and has been on house arrest. Nikki is doing her best to control herself and her behaviors, because she now realizes that her actions come with serious consequences that have the ability to impact her life both in the moment and in the future.

Nikki describes herself as a “loner,” states that she often feels “misunderstood and misread,” and often finds herself wondering if she even “likes people.” To Nikki, the world is “unsafe and unpredictable” at times. Nikki says that sometimes she is “mean to others” but that she is also interested in “helping people if she can.” She states that she avoids negative peer pressure and activities that could cause her to get into trouble, because she knows that her choices will have consequences. Nikki calls herself a “blunt person” and states she “is not afraid to speak her mind.” These two qualities can sometimes get someone into trouble, but are also qualities that can be viewed as strengths that have the potential to help someone succeed.