Gabby is 11-years-old and is going into the 5th grade. She was held back when she was in first grade because she had a difficult time learning to read. She feels that being held back was a “good thing” because she is now a more fluent reader and has more confidence in herself. She also feels that in being held back she learned to “not rush myself, to be who I am, and to be comfortable just being me.” She is looking forward to being in 5th grade because she will finally have a locker at school and she will be learning how to play the saxophone. Gabby believes that middle school will bring many new experiences which she is looking forward to.

Gabby views herself as “responsible, mature for her age, and shy.” Proudly, she stated, “My 4th grade teacher said I am the most behaved.” Gabby said that she often spends time with younger kids in her neighborhood which she likes because it makes her feel that she is “responsible and caring” and also that she can “help to keep younger kids safe.”

The one thing that Gabby is looking forward to the most as she becomes a teenager is “learning to drive.” After learning to drive, she would like to have a job at the mall. She dreams of leaving South Bend, Indiana, one day and driving to a big city. She feels that she is being drawn to the city, the lights at night, and the noise of traffic. She would like to live in a big city one day and is leaning towards Indianapolis, Chicago, New York, or Los Angeles. Gabby also dreams of learning French and going to study and live in Paris, France, one day.

Gabby is undecided still on what she wants to be when she grows up. She is torn between being a lawyer, a music engineer, and being a film producer. What she does know is that it will take a lot of work to achieve her dreams, which she confidently said “I can do!” Gabby intends to figure out what she would like to be when she grows up throughout her teenage years. No matter what she does, she stated “I will be happy if I can do any of these things as long as I am doing it in a big city.” Gabby is excited for her teenage years to begin. 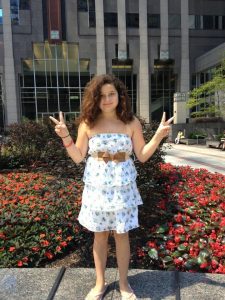