“Gun violence in the United States results in the deaths and injuries of tens of thousands of people annually. In 2013, there were 33,636 deaths due to injury by firearms, including over 21,000 suicides and 11,000 homicides. In contrast to twenty-two other high-income countries, gun-related homicides is twenty-five times higher in the U.S.–including a staggering 90% of all women and children under the age of fourteen killed with guns. The eighteen stories included in this book tell first-person perspectives of how gun violence in America affects communities, families, and individuals in countless ways and for generations. For victims and their families, there is never a return to normal, but instead a slow acceptance of the facts and often a drive to prevent others from suffering in the same way.”

“August 4th, 2019, is not a day any of us in Dayton will ever forget. The day began for me in the early hours–like so many others–with shock and fear when I awoke to a knock on our front door. The hours that followed felt like days, and were among the hardest I have experienced as mayor. And yet that tragic day ended with a completely different scene–one that captured the nation’s imagination. As I stood on stage with other elected officials and community leaders at a vigil in the Oregon District, a chant broke out: Do Something. Do Something . . .

“I believe that change will come because of the stories like those in this book. Change will come because Dayton will never stop working for it, driven by the memory of those we lost and those whose lives were changed forever. Gun violence cannot be distilled into statistics. We must read stories like these to face the pain and trauma violence leaves on those who experience it in order to reckon with the failures of our country. I hope you will share these stories. I hope they ignite a passion in you. I hope that you will vote. It is in each of our individual power to Do Something. These individual actions are the only way we will build this movement and heal our nation.”

KATE GEISELMAN’S essays have appeared at The Washington Post, Salon.com, the Rumpus, McSweeney’s Internet Tendency, and elsewhere online. She teaches writing and literature at Sinclair Community College, where she is the English Department chair. She also edits the college literary magazine, Flights.

View other titles from The Facing Project Press 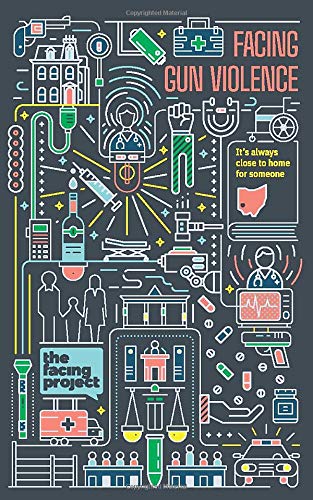