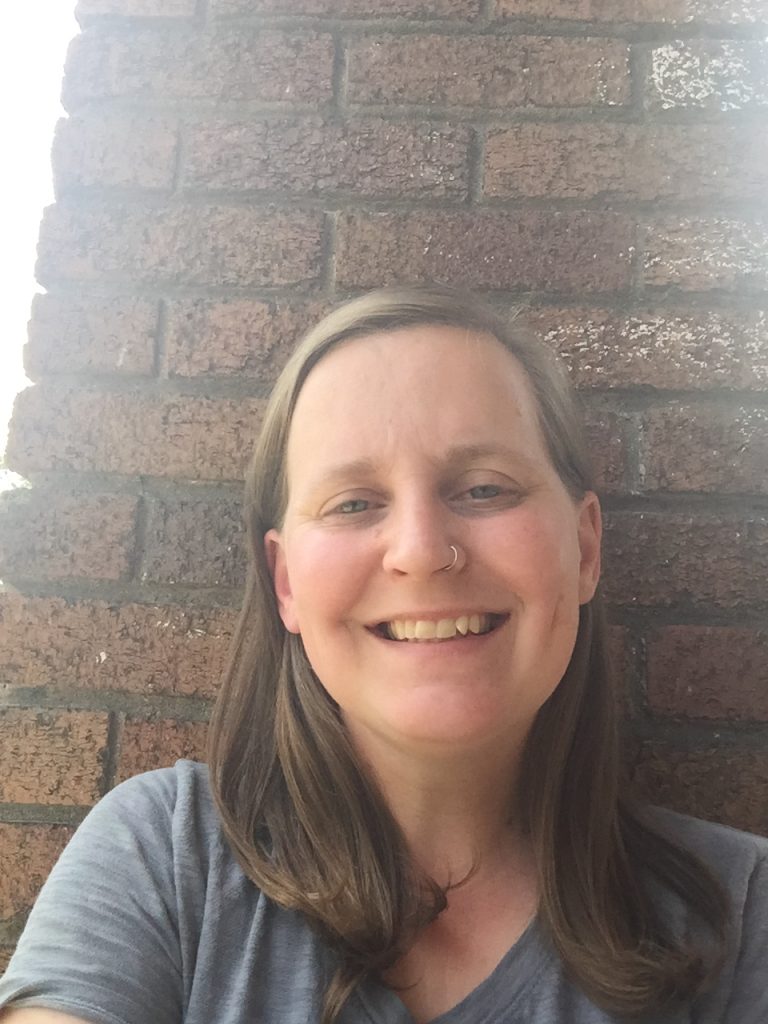 What you can’t see in the photos of Jason and I walking through the woods just after our wedding ceremony, under a purple umbrella as it started to rain, is Jason’s injured finger. The injury from an accident the evening prior involved a staple gun, wedding decorations, and a trip to the emergency room. Jason and I often joke that our family “wins at statistics.” If an outcome is statistically improbable, it is safe to assume it will occur in our family. The staple gun incident was just the beginning.

Our first year of marriage was full of adjustments, job changes, and challenges that led to me spending many days alone in our small apartment while Jason worked as a carpenter building houses. With one car, no internet, and no television, depression and loneliness became my constant companions. This wasn’t new for me. My first memory of that feeling was in first grade.

Jason and I connected with a group of people in Muncie, passionate about bringing resources to under-resourced areas of the city. In June 2005, we moved into our first home in the community we had fallen in love with.

As we settled into our new home and adopted a chocolate lab, we began to desire to grow our family. We started the adoption process, and three years later in September of 2008, our oldest daughter, Abigail, was born. As we fell in love with our little girl over the next year, we started to notice a few things that seemed off. In 2009, when Abigail was nine months old, we met with a Pediatric Geneticist. He stopped counting Abigail’s cafe au lait spots at fifty and began talking to us about neurofibromatosis (NF). He explained the possibility of development and cognitive delays and possible tumors. The appointment is a strange memory for me; I knew what was happening, but I am not able to remember specifics of anything he shared. We were encouraged not to research her diagnosis online because we would only find worst-case scenarios. He assured us that most cases were mild.

The year following her diagnosis was a blur of doctor’s appointments, MRIs, and constant worry balanced with story time, visits to the park, and time as a family. In early 2011, a bump appeared on her right leg. The bump was quickly diagnosed as a tumor and was removed in April of 2011 by a world-renowned surgeon and the generosity of our community that raised over $30,000 to provide for the procedure. Our vibrant toddler was back to herself in a matter of weeks.

Later that year, we decided to adopt a second child. I had always wanted to parent a child with Down syndrome (Ds). I had lots of experience with an older cousin with Ds, and volunteering with people with disabilities. I shared my desire with Jason, but he was hesitant. After visiting with families who were raising children with Ds, and realizing that it wasn’t scary, and their kids were pretty awesome, we registered with the National Down syndrome Adoption Network. Three weeks after registering, we were driving to Kentucky to meet our daughter, Shilo, who had been born four days earlier. During our trip, we received a call that Shilo would need two heart surgeries. On November 29, 2011, Shilo came home. After an additional hospitalization, we spent the holidays that year at home, limiting Shilo’s exposure to possible illness.

Oddly enough, those ninety-six days also hold beauty for me. I’m not sure that many people get to experience that sort of community. Friends babysat Abigail while Jason worked; prepared meals for all of us; mowed our lawn; visited me; and countless other acts of support and kindness. Our community was the one thing that kept us all feeling like we could move forward.

Shortly after returning home, I began to experience symptoms of post-traumatic stress disorder (PTSD). I frequently had nightmares and would wake up not knowing where I was, how old I was, or that I was a wife and mother. A wave of guilt would wash over me as soon as I became oriented. I blamed myself for Shilo contracting the respiratory virus, and then again for her crashing when I left to use the bathroom.

I wondered if it may have been easier if she hadn’t survived. Our days were long and solitary as we rarely left the house. Shilo vomited frequently, and nothing was changing it. She didn’t smile, and had met no milestones by her first birthday. These things got better when we were able to switch to a blended diet at a year. Although some of my depression and PTSD symptoms dissipated with her improvements, I met with a therapist a couple times. Like so many people I met, she gave me accolades for adopting a child with Down syndrome, which exacerbated my guilt about my thoughts on her not surviving so I stopped going.

As Shilo got better, two daughters meant twice the play dates, twice the story times, and twice the therapy appointment and specialists. We had a family photo session when Shilo was two and a half. We ordered a large print, certain our family was complete. Shortly after, I had a dream I was pregnant. On a whim, I took a test and it was positive. Jason and I had been married for ten years and had never been pregnant; though we had never prevented it. We were in the midst of a season of flurried activity and I was tentative about expecting. At two-and-a-half years old, Shilo couldn’t walk, we were in the midst of transitioning her from tube-feeding to eating by mouth, and Jason was beginning a new position managing a business.

My pregnancy was not met with the joy and excitement most would expect. It was a whirlwind of emotions, from happiness to tears, and filled with fear about what could go wrong. I requested a few tests, after a small abnormality was detected, and was repeatedly assured everything was progressing normally. In December of 2014 we traveled to see family for the holidays with a blood pressure monitor in tow because of my irregular pressure during my pregnancy. On Christmas Day, I was admitted to the hospital seven hours from home with symptoms of Preeclampsia and HELLP Syndrome—an acronym for hemolysis, elevated liver enzymes, and low platelets. Forty-eight hours and a failed epidural later, our son Asher was born by C-Section. He was transferred to the NICU where he remained for eight days. Shortly after returning home, he ended up in the emergency room with hypothermia, was transferred to Indy, and released three days later. While in the hospital, Asher was diagnosed with hydronephrosis. Little did Jason and I know, our son would eventually experience two surgeries for a tethered spinal cord, casting for scoliosis, and be diagnosed with a congenital heart defect called persistent left-sided svc. Asher also receives daily shots of human growth hormone (hgh).

After Asher, I had a recurrence of PTSD that left me at the lowest I had ever been. On a particularly low day, Jason came home to find the house in chaos. Nothing had been cleaned, the lunch dishes were still on the table, and he asked if everything was okay. I told him I had just had a bad day. After the kids were in bed, I opened up to him about where I was emotionally. It was no secret to either of us that I was struggling, but that was the first time I had admitted to him how difficult my world had become.

I shared with him that I had a plan to take my life. I had worked out where: the basement, because our kids don’t like it. But I hadn’t been able to figure out how to do it so that I wouldn’t be gone so long they’d get brave enough to look; but also so that when Jason found me I wouldn’t be able to be revived.

Jason encouraged me to see the doctor. The following Monday, I was sitting on an exam table sharing it all with my family doctor. Although I knew I needed help, I was hesitant to accept a mental health diagnosis and instead requested that my thyroid levels be tested. After those test results came back normal, I knew it was time to start medication.

Because of the supportive response from Jason and my doctor, I became comfortable sharing with a few others about the shit show that was my mental health. The more willing I was to be vulnerable, the more people seemed comfortable opening up to me about their own stories. After a few months on medication and the support of my growing community, I shared openly on my blog about the darkness that had overtaken my life, and how I was slowly climbing out.

I have no memory of Asher’s birth because I was sedated, but I do remember Jason leaning over me during labor, crying, and saying, “Why does everything have to be so fucking hard?” That phrase sums up the last eleven years. While that may sound negative, I believe that hard moments and beautiful moments can coexist and are not at all mutually exclusive. Initially, I was hesitant to share my mental health journey because of the varying opinions about treatment; many times, those suffering with depression are encouraged to pray more often, get plenty of time outdoors, or “choose joy.” I was prescribed medication that allows me to be a much better wife, mother, and friend. I felt like myself again.

People sometimes share that they are inspired by the fact that I am an adoptive mom, I advocate strongly for my kids and the disability community, or that I speak openly about my mental health. I believe what they are responding to is not what I am doing in my life but rather my willingness to be vulnerable. One of the lies of depression and anxiety is that you are alone, not enough, and too much at the same time. The more open I am about myself and the challengingly beautiful life we live, the more freedom others have to do the same.

Andrea is a stay at home mom. She spends time caring for her three children and juggling therapies and specialist. She is active in her neighborhood and community, advocating for the rights and needs of people with disabilities, and speaking on the topics of disability and theology. Andrea loves to read nonfiction, write, be outside, and spend time with family and friends.

A Ball State graduate, Liz Bergren is a public relations professional who enjoys helping organizations and community members share their stories with others. Liz believes in the power of vulnerability and is humbled to be a part of The Facing Project.