A woman changes her life to help her kids and, ultimately, others.

Relapse can cause many individuals struggling with drug addiction to feel like they have failed. The resulting feelings of shame, guilt, frustration, and anger often leads to further relapse and a sense that the cycle will never end.

The American Addiction Centers however, has a different view on this subject. They say, “Relapse is considered a normal part of addiction recovery and should be understood to be a stepping stone on that path and not as the end of the road. Relapse often indicates that treatment needs to be reinstated or adjusted.”

The story you will hear in the second part of The Depths of Addiction is from a woman who found the help she needed to break the cycle of addiction. You can listen to her story on NPR or read it below.

“Eighteen months later, I found myself in jail again. By then I had six felony drug charges. Sitting in jail, I knew prison was a real possibility. I was faced with having to change my entire life or return to the only behavior I had ever known.” 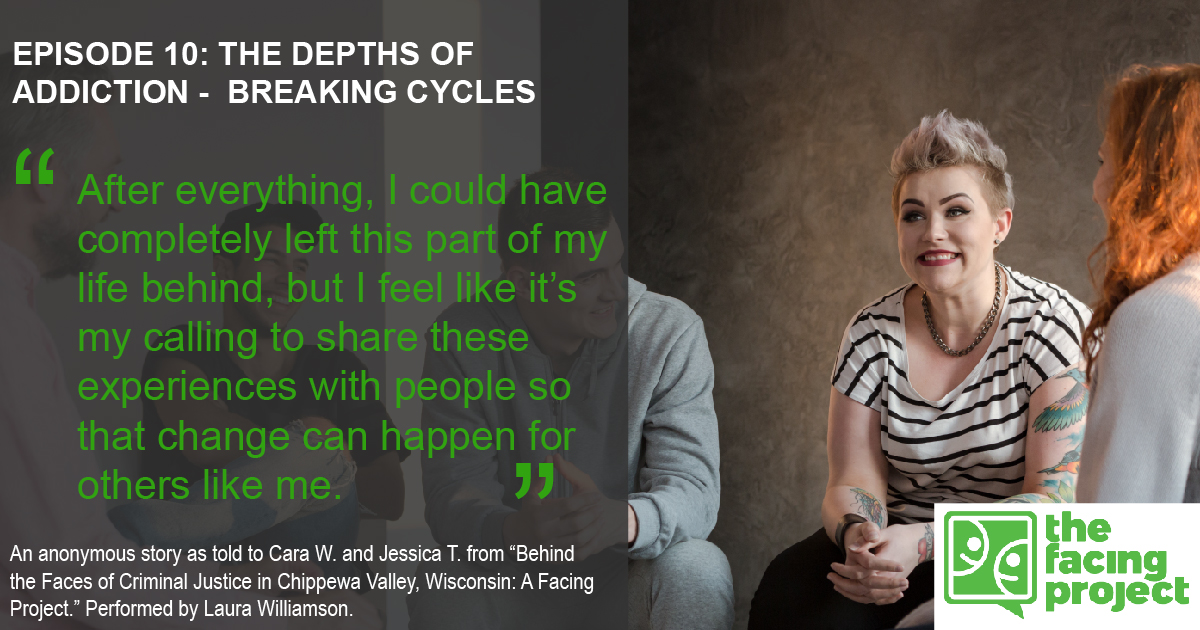 An anonymous story as told to Cara W. and Jessica T. from “Behind the Faces of Criminal Justice in Chippewa Valley, Wisconsin: A Facing Project.” Performed by Laura Williamson.

My parents were teenagers when they had me. My grandfather wouldn’t let my mom use public assistance, so she worked all the time. He thought since we had clothing, food, and a roof over our heads we were good. But with my mom not around, there was a lack of nurturing in my childhood.

My dad was an alcoholic. He regularly hosted keg parties. I spent a good part of my early years exposed to alcohol use when I was at his house. Once I became a teen it felt natural for me to join the party. I didn’t want to become my dad, so I smoked weed instead of drinking . . . and, by late high school, I started selling marijuana.

My weed supplier also had meth, cocaine, and heroin.

I tried meth after I had my first son, one year out of high school. I didn’t realize it was meth at the time. My supplier told me it was called glass. When I took it, everything became clearer. I started making lists and thought my whole life would be fixed. Then the sun came up and it was a whole other story. I knew it would be a problem for me. I told the supplier to keep it away.

After I finished getting my accounting degree, I was reintroduced to meth. I used because of body insecurities, and it made me lose weight. But once I found out I was pregnant again, I quit. Later my husband and I moved to New Richmond. That city had the same meth problem Eau Claire has now. I was looking for marijuana, but all I could find was meth. So, I started using again.

This is where I really entered a cycle of drug abuse. I would lose my job and house, quit using, get everything back, and then to celebrate, I would use. Soon I was back to selling drugs to pay bills and eventually become addicted . . . once again. This cycle repeated five or six times. The only thing I felt good at was using and selling drugs, and it felt natural to go back to them.

Along the way, my marriage ended and I was arrested twice on drug charges. The first time was in St. Paul. The second happened in Eau Claire, and I went through the AIM Treatment Court . . . it’s a program for women to establish a crime-free lifestyle. I did well, but at that time the program only focused on addiction. It never dug into the relationship and money problems that led me to using drugs. So, after being sober for three years, I went back to meth.

Eighteen months later, I found myself in jail again. By then, I had six felony drug charges.

Sitting in jail, I knew prison was a real possibility. I was faced with having to change my entire life or return to the only behavior I had ever known. I decided to turn my life around no matter what happened. My boys deserved a better life than that. If I went to prison, I wanted them to see me healthy before I went.

I applied for AIM Court again, but the county put me on a cash bond. My family wouldn’t pay it. Another option was to accept a plea bargain and plead guilty, and they would let me out of jail. The plea capped the prison time at three years and ordered a pre-sentence investigation, which took three months. I was free during that time, so I asked for daily urinary analysis, in order to keep me away from meth, but they didn’t listen.

There was nothing set in place before I was released. I was in limbo, and felt set up to fail.

Luckily I remembered the AIM Court Coordinator and went straight to her office, crying from stress. Not having any conditions on my bond scared me. We fought to reopen my case to include the drug tests. During the three months before my sentencing, I acted as if I was already in AIM Court. I attended weekly meetings and whatever programs I could get into. I was able to stay at a refuge house, and I was accepted into a program that provided housing to chronically homeless people. I paid 30% of my income for rent, and they covered whatever I couldn’t.

Because I was proactive, everything fell into place. By the time I went to court for sentencing I had a full time job and a place to live. The ruling was for me to attend AIM Court and not go back to jail. AIM Court had added programs like Dialectical Behavior Therapy, a course on relationships, and a program addressing childhood trauma. I completed these groups and began to develop a support network outside of family and my old using friends. I did well and graduated.

After everything, I could have completely left this part of my life behind, but I feel like it’s my calling to share these experiences with people so that change can happen for others like me. I’m now a full-time student at the University of Wisconsin-Eau Claire, and I plan to work on criminal justice reform so the system can better keep ex-incarcerates from returning to their previous habits. I also want to help the general public understand addiction, and their potential role to help those coming out of jail from reentering.

I believe when everyone starts to see each other with dignity and respect, positive change can happen.

If you are facing addiction and looking for a way out, The National Drug Helpline offers 24/7 drug and alcohol help to those struggling with addiction. Call the National Hotline for Drug Abuse today to receive information regarding treatment and recovery at 1-888-633-3239 or visit drughelpline.org.

According to American Addiction Centers Cognitive Behavioral Therapy (CBT) is an effective treatment for many individuals seeking help with living a drug free and other major life changes.

COPYRIGHT © 2021 THE FACING PROJECT ALL RIGHTS RESERVED. TERMS OF USE.