If you follow our posts on The Facing Project Facebook page, you more than likely noticed throughout August, September, October, and even into November, we highlighted the work that had been happening in three different Facing communities:  Rome, Georgia; Muncie, Indiana; and South Bend, Indiana.

Within a three-week period, each city hosted its own Facing Project monologue event and book release.  Combined, over 600 people turned out to hear first-person, creative nonfiction stories of their own neighbors on what it means to overcome abuse, depression, and poverty in Rome; face autism in Muncie; and be a teenage girl in South Bend. 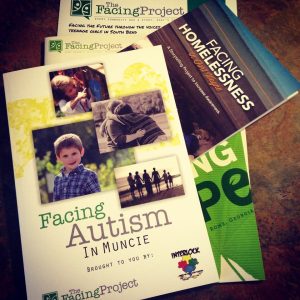 Rome, Georgia, held their event, “Facing Hope in Rome, Georgia,” on October 26, 2013.  Nearly 100 folks from as far away as Atlanta came to the event.  The project, an effort among Georgia Highlands College, Berry College, Georgia Northwest Technical and over 25 nonprofits, celebrated the stories of those who have experienced abuse, incarceration, poverty, and depression but came out on the other side hopeful for their futures.  College students from each of the campuses worked with storytellers and served as writers on the project.  This opportunity provided the students with the experience of walking in the shoes of the storytellers—something that is hard to teach in the classroom.  Three-thousand copies of “Facing Hope in Rome, Georgia” were printed and are being distributed throughout the greater-Rome and Floyd County area.

Kelsey and I worked with Interlock East Central Indiana to organize “Facing Autism in Muncie, Indiana.”  We held the monologues and book release on November 2, 2013, at Muncie Civic Theatre.  A crowded house of 350 came out to see the performances inspired by the book that told the stories from the perspectives of moms, dads, caregivers, and those on the spectrum.  Seven-hundred books were given out at the event, and over 2,000 more are being distributed throughout the Muncie community to schools, doctor offices, ABA clinics, places of worship, and all of the public libraries.  Communities such as Evansville, Indiana, Fort Wayne, Indiana, and Chicago, Illinois, have requested copies of the book for k-12 teacher training.  Muncie Mayor Dennis Tyler gave a proclamation at the monologues forever making November 2nd “Facing Autism Day in Muncie,” a day to celebrate the coming together of the community to better understand autism spectrum disorder from the unique perspectives of those who live on the spectrum each day.

South Bend, Indiana, spent November 8, 2013, “Facing the Future through the Voices of Teenage Girls.”  The booklet, by the same name, was released at the event that also premiered a film inspired by the stories.  The booklet and film followed the lives of 17 teenage girls from all different backgrounds but with the united experience of growing up in South Bend.  The girls shared their current lives and hopes for the future, exploring topics from alcoholism, friendships, teen motherhood, and careers.  South Bend Mayor Pete Buttigieg said, “Every girl who has contributed to The Facing Project has an important story to tell.  I’m proud the project has given South Bend’s teenagers a larger voice and connects them through their own words to our community.  I encourage each of them to follow their inspiration and give themselves permission to dream.”  The project was a combined effort of Ivy Tech Community College North Central, Sister 2 Sister, and the Mayor’s Office.  Over 150 folks turned out for the booklet release and film premier.

To learn more about what’s happening in Facing Project communities, check out the various sites.

Next up will be Atlanta, Georgia, in January with “Facing Sex Trafficking: Atlanta’s Dirty Little Secret,” and late spring 2014 events from “Facing Drug Awareness in Barbourville – Knox County, Kentucky,” and “Facing Hunger in Manhattan, Kansas.”  Other projects are in the pipeline and will be announced soon.